Early Days in the Range of Light 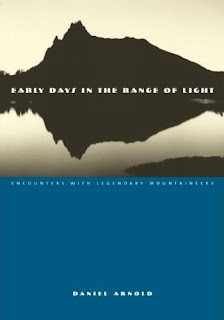 It's 1873. Modern climbing gear and Gore-Tex are a century away, but the high mountains still demand your attention. Imagine the stone in your hands and thousands of feet of open air below you, with only a wool jacket to weather a storm and no rope to catch a fall.

Daniel Arnold did more than imagine--he spent four years retracing the precarious steps of his climbing forefathers, and lived to tell their riveting stories in Early Days in the Range of Light. From 1864 to 1931, the Sierra Nevada witnessed some of the most audacious climbing of all time. In the spirit of his predecessors, Arnold used only rudimentary equipment--no ropes, no harnesses, no specialized climbing shoes. Sometimes he left his backpack and sleeping bag behind as well and, like John Muir, traveled for days with only a little food rolled into a sack slung over his shoulder.

In an artful blend of history, biography, nature, and adventure writing, along with dozens of photographs, Arnold brings to life both the journeys and the stunning terrain. In the process, he uncovers the motivations that drove an extraordinary group of individuals, including Clarence King, John Muir, Joseph LeConte, and Norman Clyde, to risk so much for the summits of one of our most fabled landscapes.

Praise for Early Days in the Range of Light:
"Dan has done something unique in climbing histories--he went back in time--first, by ferreting out and suffusing himself with ancient lore, then by forgoing modern equipment, and finally by retracing the finger- and footholds used by the first climbers. His approach, as wackily original as the colorful characters he introduces, worked. This book is actually a Technicolor time machine to the earliest explorations of American high peaks."


"Early Days captures the strengths and weaknesses of those who made the first ascents of the rugged peaks in John Muir's 'range of light.' Arnold is especially good on Clarence King, and writes with great originality and insight. This is a splendid chronicle of early climbing in the Sierra Nevada."
-Royal Robbins


"For every lover of the Sierras who's wondered where the names of the peaks came from, who the pioneers were behind the names, and what the stories were they told around their camps."
-Rick Ridgway, author of Seven Summits and The Shadow of Kilimanjaro


"I much admire what Dan Arnold has accomplished here. Approaching the Sierra Nevada through the lives and passions of its early climbers, he shines fresh light on this mythic mountain range and its place in both the geography and the legend of the Far West. For Arnold himself, each trek is a kind of pilgrimage. His rock-by-rock retracing of their original routes becomes an arduous and enlivening journey of personal discovery, a climber's odyssey and eloquent tribute to the challenging wonders of the high country."
-James D. Houston, author of Snow Mountain Passage
Home
Subscribe to: Posts (Atom)